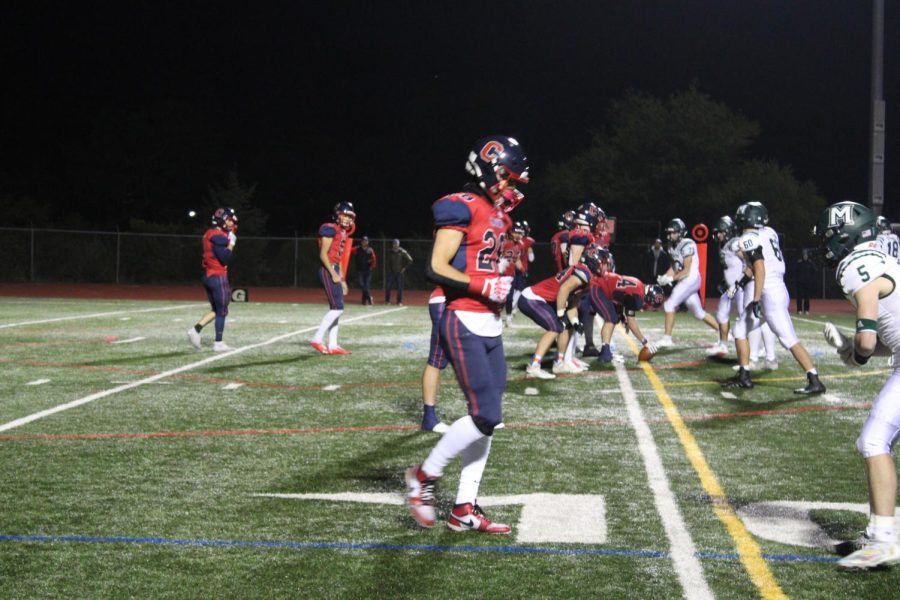 Football sets up for a first down.

Varsity Football crushed their main rival, Miramonte, at home on November 5 for a score of 42-15. This was the teams last regular season game of the season and Senior Night, on which seniors celebrated for their time and dedication to the team.

Senior varsity football player Arian Mosaddad was proud of the team’s triumph: “We played really great. The D line played great. As a team, we all really just clicked together and we performed and we took the W.”

“We knew they had a lot of good players. It was gonna be a different game from last year. It’s always fun playing at home wearing those red jerseys on senior night,” senior varsity player Nolan Flanagan added.

“We knew we were favored. So we had to come out hard and aggressive, but in the end, you know, we got to win and we made coach Macy proud,” said senior Zion Adams.

Senior players were also excited about their final game. “It was a great time. I think we really wanted to get out there all the seniors and just kind of just have a great time on the field [and] played around,” said senior varsity Player Elijah Klock.

“It was special for our seniors as [it’s] our 4th year playing football, and it was just great to have a home game,” said Moussad.

“It was great to honor all the seniors that have been in the program for a long time. It was a fun night, always good to go out with a win. Fans are going to be out. So glad we came away with the win,” said Flanagan.

Klock expressed that the team had high expectations for Senior Night: “I think every senior night that I played on the team, it was their night. You know, they’ve really got it in their heads. And so I think it was one of our main goals to you know, have it two separate things you know, we had our senior night but we also had to play a game and didn’t let it didn’t let it affect us.”