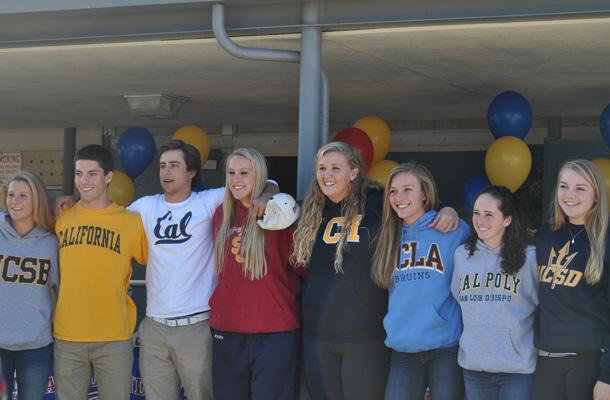 Nine seniors signed college letters of intent for their respective sports on Wednesday, November 13, at lunch in the quad.

Each student athlete was asked to describe his or her favorite Campolindo sports memory before signing the intent letter. A large crowd of family and friends cheered for each athlete when they were announced.

Soccer player Emilky Orwig signed to play at Cal Poly. Hannah Grubbs is headed to the UCLA for swimming, and Janell Ingersoll will go to the University of San Diego for crew.

Renno was not worried about each athlete’s teams future’s without them. “Obviously losing athletes who are as good as these kids hurts, but our programs do a great job of developing young stars,” Renno said.

Campolindo has a history of nurturing great athletes. In the 2008 Summer Olympics in Beijing China, three former Cougars were medalists.

Karas is excited to play in college. “I’m pumped to get out there and go to work,” he said, but he is not worried about Cougar baseball in his absence. “We’ll be fine. We’ve got a lot of young talent,” he said.

Cougar baseball coach Max Luckhurst praised his Cal bound athletes. “I’m very proud. This is a culmination of three years of hard work,” he said. Luckhurst expected his athletes to behave themselves in their new programs next year. “I expect them to be good people and follow the rules of society,” he said.

Jensen is excited to be headed for the collegiate level. She hopes she will make a big impact on her USC team. “I’ve wanted my entire life to play in college,” she said.

“Students at college work very hard to maintain a balance of academics and athletics. Our athletes have a good history of maintaining high academic performance,” Renno added.