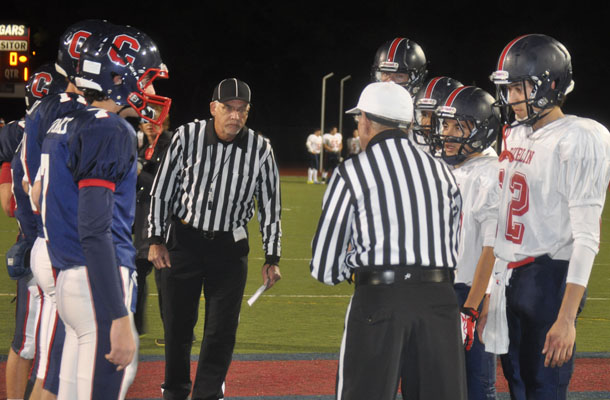 The varsity football squad finished another undefeated DFAL season. Quarterback Andrew Zoliantakis directed the offense to a 50 point performance against Dublin on November 8.  The team has received a bye for the first round of the North Coast Section (NCS) Playoffs, which start this Friday, November 15.

In addition to being the last game of the regular season, it was Senior Night for the cheerleaders and players on Friday. Their families presented the seniors with roses and pictures were taken under a red, white, and blue balloon arch.

Furthermore, the cheerleaders were joined by youth from the week’s Campolindo sponsored cheerleader camp. Girls from Moraga, Lafayette, and Orinda joined the high school cheerleaders in performing various routines and chants.

The football team took a 29-3 lead into halftime. A field goal was the only points scored by Dublin.

Key players in the first half included senior Justin Dunn and junior Nick Fadelli, who each ran for touchdowns in the first quarter.  However, the ground game on Friday wasn’t reserved just for the tailbacks. “I think one of the greatest parts of the game was when our starting lineman Dan [Samaniego] ran the ball for a touchdown,” senior defensive back Andrew Ahazie said.

In the fourth quarter, Dublin managed to score 26 points. However, this was no match for Campolindo’s 50 points, half of which were earned in the first quarter. “I think our first quarter, we were so pumped up from the pre-game activities that we were ready to go,” Samaniego said.

According to Samaniego, a few of the star players this season have included Zolintakis, Dunn, Fadelli, senior Phillip Rei, and junior Adam Remotto. However, Rei injured his ACL in the October 18 game against Las Lomas and therefore is unable to play for the rest of the season.

Samaniego added, “Last year, it was a pretty close game until half. Then we broke off.”