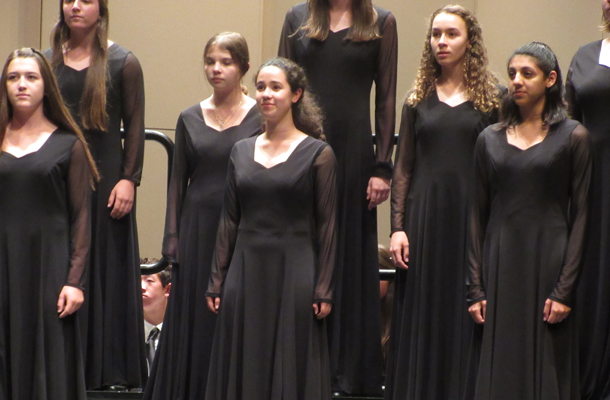 Choir performed its final concert of the year on May 18 at Lesher Hall. Seniors exchanged goodbyes with choral director Mark Roberts and reflected on their high school vocal careers. As Roberts put it, most seniors have spent at least 600 hours with him. “If your name is Sam Pride,” said Roberts. “We’ve spent 1200 hours together.”

Some awards were given based on student votes, such as a plaque given to choir members with the most impact on their respective choir. Others were superlatives given by Roberts, like Vocal Music Achievement and the National Choral Award.

Senior students with their parents were also recognized at the beginning of the concert, and had their photos taken. At the end of the awards, choir members turned the tables on Roberts and surprised him with a gift.

The whole concert was bittersweet for the graduating members, like the aforementioned senior Sam Pride. Pride was part of Robert’s peer tutor project, and helped freshmen over the year develop their skills.

Pride, after showing an interest in conducting, also had the opportunity to direct a freshmen song at the concert. “Here at the end of the year, Mr. Roberts talked to me about conducting and I’ve been reading books that he’s given me, so I practiced with the choir and got them to sound the way I wanted them to sound,” he said.

“It was kinda nerve-wracking at first, being in charge for a full period. But it turned out really well,” said Pride. He added he felt “pretty sad” about choir ending for him, however.

Sophomore Marika Dow said, “I’m sad that the seniors are leaving. A lot of people were crying but Mr. Roberts wasn’t. The juniors next year will probably do as well as the seniors did this year, but the seniors were really good.”

Dow was herself tutored by a peer, junior Lucy Burcham, who assisted this year with Women’s Ensemble.

“The mentoring program that started this year was really helpful since we had Lucy in our group it was a lot of help. If I do choir when I’m a senior I would definitely do the mentoring program. I think Lucy will do a great job next year being a mentor again. I think with the mentors, the freshmen improved their performance and when I was a freshman I think it would’ve been helpful,” said Dow.

Dow’s favorite part of the performance included Concert Choir’s rendition of “Stars,” calling it the most “exciting” part. The lyrics were part of a poem set to music about the night sky, so they turned off all the lights at Lesher Hall, leaving the audience to be illuminated only by flashlights meant to mimic the song’s namesake.

“The spring concert went really well because we had a lot of energy and our choir hasn’t been doing too well but at the show we did really well. I had a lot of fun throughout the concert,” added Dow.