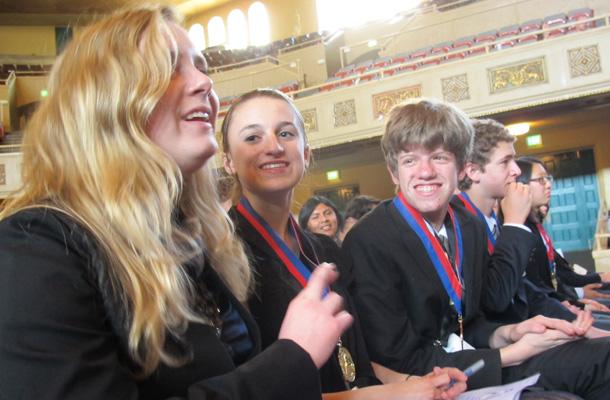 The National Academic Decathlon tournament revealed its champions on Friday, May 3, with Campolindo listed as champions of the medium size division. Junior Christoph Steefel was also recognized as the highest scoring individual in the same division.

Months of competing, including a win at the county competition, and another at the state competition, preceded this historic victory for the club, explained coach Paul Verbansky.

Verbansky said the team is “ecstatic, incredibly excited considering that just a few years ago, when many of these guys on the team were just freshman,we barely had enough students to participate.”

The 9 student squad, made up of juniors and seniors with GPA’s all across the board, competed against teams from around the nation, according to Verbansky.

Students work on the material by studying essays and facts to prepare themselves for the topic, according to Verbansky. This year’s topic was Russia.  Junior Zach Scherer said, “Since county we’ve been meeting 3 times a week after school and on Sundays, so 5 hours a week.”

“The students had 2 days, one over Spring Break and the other on April 26, where they were in the computer lab here all day and they took tests by logging into a secure server that was unable to access anything else,” said Verbansky.

This set up for competition was different from what the team was used to. Scherer said, “We were nervous; but in some ways you’re less nervous because the other teams aren’t right there in front of you, but you’re still very nervous because theres a lot at stake.”

The 2 days of testing were exhausting, according to Verbansky. “I know it’s just an academic event, but theres a lot of work, and they were physically exhausted.”

Verbasky was proud of his team for the improvement they made over the year. He said, “With every level of competition, the students increased their level of performance significantly. They didn’t just keep the same score and just happen to win, but they actually did better each time.”

The team got the news about their victory a day earlier than expected, according to Scherer. He said, “We were really excited, it was a little different because we heard via email, and it came early.”

Verbansky said, “The staff, the school, and the students are very excited. It’s a nice feather in Campo’s cap.”