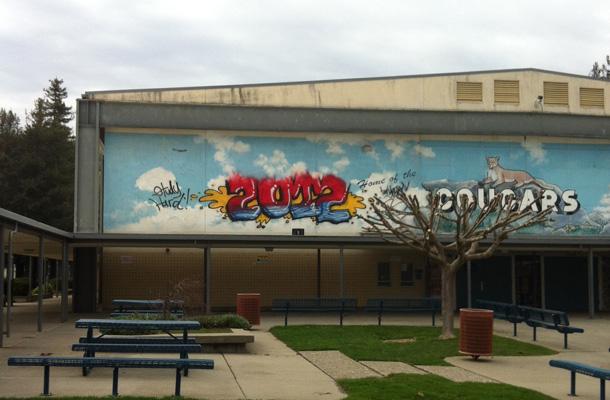 The cougar mural above the gym was vandalized on December 27 or 28, according to campus supervisor Jim Graves. “2012” and “Study Hard!” was painted on the left side of the mural.

As a result, district personnel painted over the left and right sides of the mural with white paint, leaving only the center of the mural still intact.

The administration does not know who vandalized the mural and there are no leads. The police were notified and the security cameras were checked, but the administration still has “no information on who the culprit really was,” said vice principal Sharon Bartlett.

The administration will decide what to do with the remainder of the mural, if anything, 2 years from now. At that time, the entire campus will be given a facelift, according to Bartlett. The yellow tiles on the walls around campus will be removed, the trim of the roof will be painted to match the CPAC, and small gardens may be planted. She said the future of the mural was “not even being discussed right now” because the renovation is “an obvious time to do it.”

Bartlett is frustrated that the school has to spend time and money dealing with the vandalism. “I think at a time when everyone is trying to do more with less, to spend money on un-doing vandalism seems like a waste,” she said.