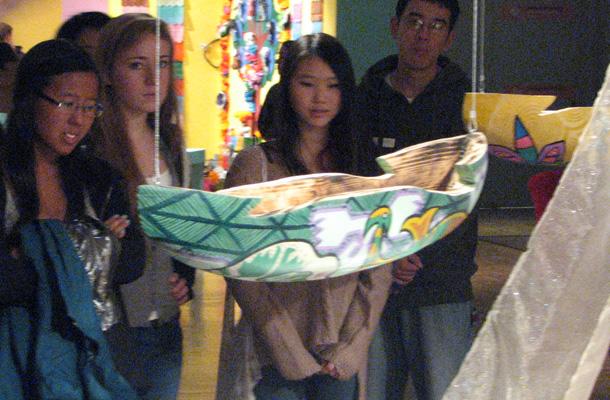 About 130 students from Concha Martinez’s Spanish 2 and 4 classes embarked on a field trip to the Oakland Museum on November 28. Students saw an exhibit about “Día de los Muertos,” a Mexican holiday devoted to paying respects to the dead.

On the way to the exhibit, students stopped in Fruitvale, Oakland, to taste authentic Mexican food. They were encouraged to try food that was new to them at local taquerias. Most of them ate beef “lengua,” (tongue) or “cabeza” (head). Senior Elliot Kim tried part of a taco with cabeza. “It was tasty. I could really taste the cow essence,” he said.

Students then toured the museum in two groups with guides. The exhibit included traditional and nontraditional altars made by Bay Area artists. While most of the altars were dedicated to family, some paid homage to important historical figures in California, including Little Bobby Hutton from the Black Panther Party.

Sophomore Nadia Aquil said, “I liked the altar with the baby, because it was really weird, but it was emotional. I even cried a little bit.”

According to Senior Rahil Jetly, viewing the altars was interesting and informative. “My knowledge on Mexican culture and history grew vastly,” Jetly said. “I learned a lot, and I hope we do this in the future.”

In the past, the field trip was only available to Spanish 4 students. According to Martinez, “A lot of Spanish 2 students don’t continue, so I wanted to include more students.” Martinez added, “In the future, the field trip may include all of the Spanish 2 classes.”