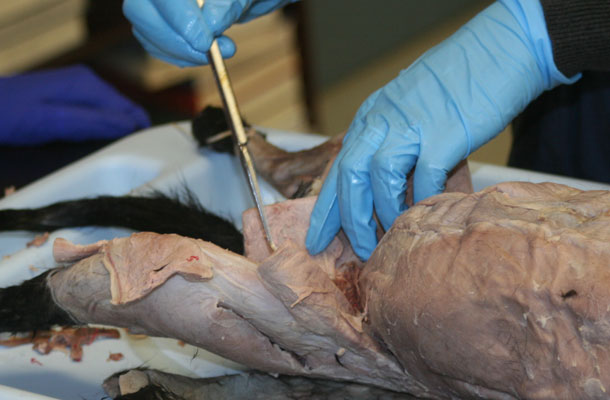 Roxanna Jackman’s physiology class is renowned for its cat gore.

Students learn, in groups of four, the different muscles and bones of the body by dissecting cats, which share similar anatomy to humans. Jackman said, “The goal of the class is for students to learn the language of anatomy.”

Jackman orders the cats through a magazine that sells different dead species such as pigs, cats, frogs, and fish, all in the name of science. The company is based in Idaho, so there is little chance that students will have to dissect any of their own lost pets. These cats are strays kept in animal shelters for as short as one week, as they wait to be adopted, before they are put down due to overpopulation.

Once the cats arrive, students begin the dissection process by removing the skin and fat from the exterior. This usually takes two and half days and it helps students learn how to use the tools needed for some of the trickier operations later in the year.

Once all the skin has been removed, the cats are unrecognizable. Throughout the whole process the class compares the similarities and differences between cats and humans, while taking into account how each individual muscle cooperates with the rest of the body.

During the year students take practical tests where they point out different muscles. Memorization is crucial in the course.

Mallory Brown said,” People should take physiology because it is a really fun and interesting class where you get to learn about the body.”

A common misconception about physiology is that everyone is required to dissect the cats. If students are ailurophobic, having a fear of cats, or have any other problem with doing the dissection, it is still possible for them to pass the class. One would have to take on other responsibilities such as cleanup or note taking. However, they will still have to memorize all of the muscles for the practical tests.

Physiology is a class for those interested in any form of medicine or are those curious about the interworking of the human body.