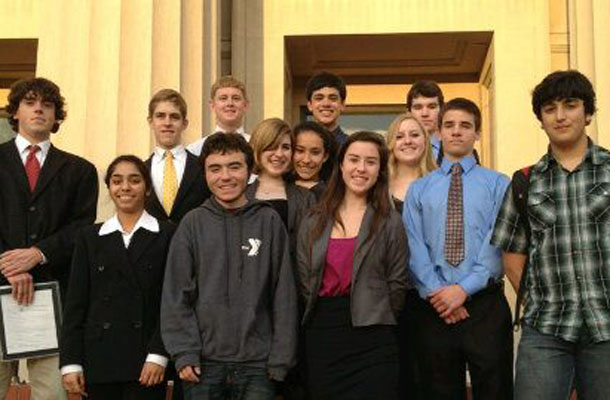 The Mock Trial team came up short against Miramonte in the club competition semi-finals on Thursday, February 16th and Tuesday the 21st. Campo competed against the Miramonte prosecution in their first meeting, and then against the defense in the second contest.

Though the Mats prosecution beat the Cougars,  junior Meera Madra said, “We still did pretty well especially seeing many people were substituting for people who are in Youth and Government.”  According to Madra they only had two attorneys instead of the normal three. Under the circumstances, the Mock Trial team is pleased with how they did against the prosecution.

Against the Miramonte defense, Campo was ultimately eliminated from the semi-final competition. The Cougars did win three trials before falling to the Mats.

In the final trial the prosecution was trying to prove that a boy murdered his supposed best friend. Although Campo lost the competition, they did win the case verdict. According to Gabrielson, if this had been a real trial, the boy would have been declared guilty. Gabrielson said, “It was really close, but in the end they outperformed us.”

Gabrielson also said that he and Howard had strong examinations and Rochlin had a strong closing statement.

Regarding their loss against the Miramonte defense, co-leader Claire Svedberg said the squad’s effort was good, especially as Miramonte is traditionally a strong opponent.  Svedberg said, “We really held our own against them.”

Co-leader Nora Mohamed said, “the season went pretty well seeing as we were a all new team.” There were only two seniors this year. Mohamed added, “Next year we will have a great chance of going to state and beating all the teams in our county.”