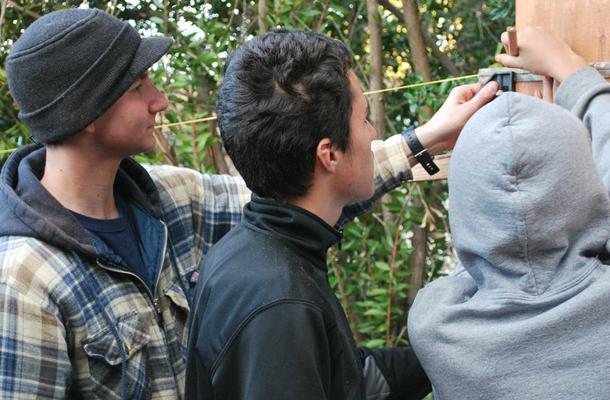 Boy Scouts of America are required to accomplish several services before they can ascend to the rank of Eagle Scout, the highest boy-scouting rank attainable. In order to become an Eagle Scout, Boy Scouts who are currently Life Scouts must plan and develop a community service project.

“It’s a project that you want to do to benefit a community, to benefit anyone who needs help,” said Hughes, who completed his project on December 6 and 7. He replaced the fence that borders one side of the walkway from Sandalwood St. to Burton Valley Elementary.

Hughes was inspired to rebuild the fence because, as a former student of Burton Valley, he walked up the path to school every day. “I thought it was a good idea to fix this fence because it’s always been torn down ever since I moved here,” he explained.

According to Hughes, he received help with physical construction and funding. The Burton Valley PTA paid for lumber and other construction materials.

Knud Gotterup and his son, Christian Gotterup, are neighbors of Hughes. They helped hammer and measure fence boards, and cleaned up spare wood and nails. “I thought it was a great community service project that Nick put together. I just thought it was all around a great project for the community, for the school, for the kids, for the homeowner,” Knud Gotterup said.

Christian Gotterup is in 2nd grade at Burton Valley, and he and his dad are relieved that his walk to school will now be safer. “We won’t have to worry about any loose pieces of wood or falling on those pieces of wood. Also, the little window they created so you could see cars coming, that was a really good idea. It should be very safe,” said Knud Gotterup.

Hughes is proud to have earned his new rank. “I think it’s a good life accomplishment,” he said.

“I think that for a long, long time, all of us who live in the area will remember what a great project that was, and when we go by that fence we’ll think, you know what, that was really cool because it was falling apart and now it looks great,” said Knud Gotterup.