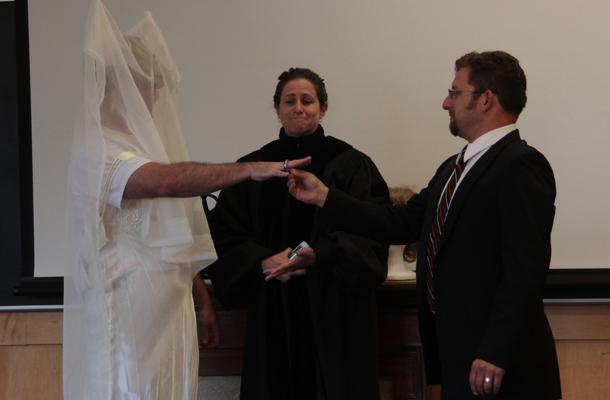 The Video and Drama Departments officially tied the knot at a wedding ceremony held on August 31.

Advanced Drama and Video 4 student, senior Kyle Merryman, attended the ceremony under the impression that the event was merely an ice cream social. “We all got into the classroom. Seligman is in a tuxedo, and suddenly this beast –Donohoe– comes out in a wedding dress. Mrs. Donohoe took on the voice of the priest in The Princess Bride when performing the matrimony, and many tears were shed by Seligman,” said Merryman.

The wedding ceremony consisted of Seligman as the groom and Donohoe as the blushing bride with his notorious Viking hat and white veil.

According to Seligman, the goal of this union was to stimulate collaboration between the Video and Advanced Drama students. Since Video students are in constant need for actors in their film projects, the Advanced Drama students can help fill these roles. “Currently, the Video 1 students have their classes at the same time as the drama students, but the Video 4 students don’t,” said Seligman. “Why a marriage? Because we seize any opportunity to make ourselves look ridiculous in front of the students.”

Jamie Donohoe believes that this collaboration will be beneficial in teaching acting and video skills. “It is important from an acting standpoint since acting on stage is different from acting on film. You change from broader to more specific focus and do several takes from different angles, which make the actors a lot more flexible,” said Donohoe. Merryman agreed, saying that it was a “good technical experience for actors, especially for subtleties -like a wink or twitch of the mouth-instead of big gestures.”

Even though the ceremony was a memorable one, Seligman and Donohoe believe that more collaboration is needed to bridge the gap between the two departments. Seligman said, “I think the students don’t know each other very well yet; for a natural collaboration, we need to do more social events.”

According to Merryman, the ceremony was a success, since it was “really good at establishing what was happening since nothing says it more than a marriage.” He hopes that future discussions between the Advanced Drama and Video students will be held in addition to the socials.